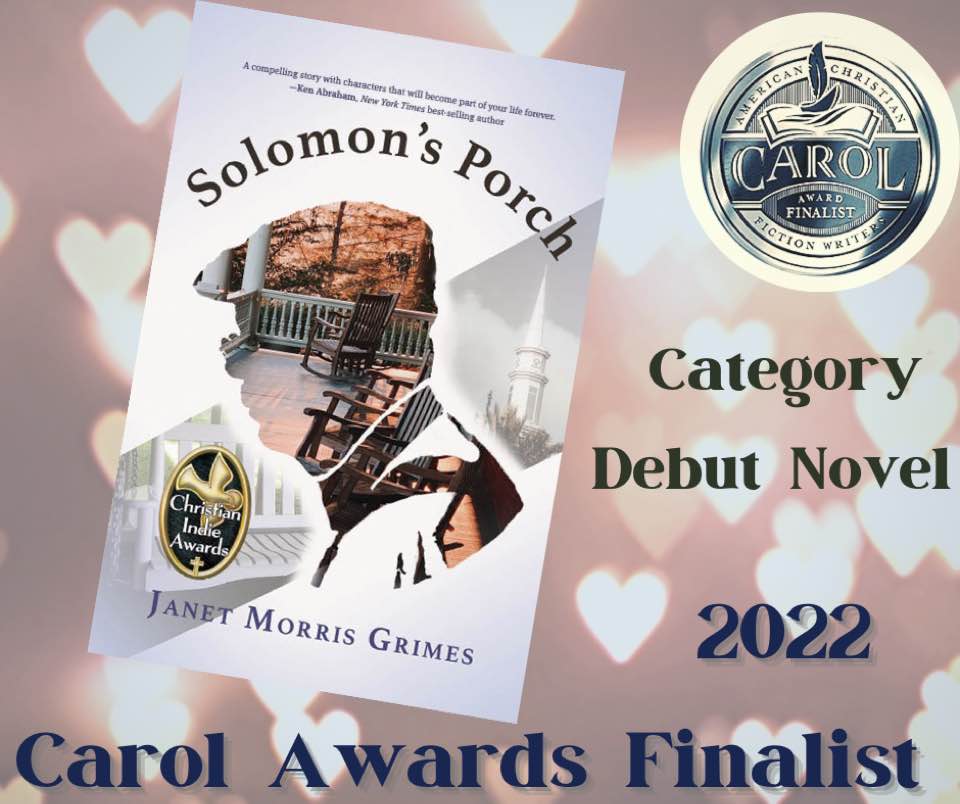 American Christian Fiction Writers. Definitely the largest writers’ conference I ever attended. That first year for me, in 2016, it was so easy to feel intimidated. As if everyone in attendance already had a hefty publishing contract, and I was simply a bystander roaming the halls. But that’s not how they treated me.

Instead, they invited me to their table, asked me what I had in mind, and shared notes with me during mind-blowing classes.

The next time for me, in 2018, a friend encouraged me to get headshots taken; another perk of the conference. I did it, not because I needed them, but because one day, I might.

The next day, I presented the idea of Solomon, a loose character sketch of a gentle soul of a man on a single piece of paper. A couple of agents and editors expressed interest, saying they’d never read a book like that. It was enough to keep me going. To commit to finishing a book that only existed in my head.

Later that night, at the Carol Awards banquet, I took it in as author after author, my heroes, graced the stage in fancy gowns with even fancier trophies. Some had over 50 books with their name on the cover. Still, they all started with just one.

I remember asking God to show me how to do this; and how to do it well.

Last Friday night, I got a message from that same friend. The one who encouraged me to get those headshots taken four years ago. She said Solomon was a finalist for one of those awards.

And I lost it. Completely lost it.

Nothing happens quickly in this business. Most is done behind closed doors with very little feedback. Even those authors with 50 books to their credit would say they aren’t sure if they’re doing this right.

But we never do it alone. It’s a team effort. Because of writers’ conferences, I found a publisher willing to take a chance, a brilliant friend who knows book covers, and editors who’ve taken the story I oozed out all over the page and corralled it into something that flows freely. I found some great beta readers to show me what worked well and helped track down every mistake.

All I know is I’ve now got a book with my name on the front, my husband’s silhouette on the cover (because he gets me), and my photo on the back because someone cared enough to tell me I should get ready.

I only have one book to offer, so far. But here it is; my loaf and my fishes. I’m ready to give it back to see who it might help or encourage.

I have no idea if Solomon will win this award. But at this point, it no longer matters. Because four years ago, he didn’t even exist. And now, he gets to go to an awards banquet with me in September.

How cool is that?

Janet Morris Grimes may not have realized she was a writer at the time, but her earliest childhood memories were spent creating fairy-tale stories of the father she never knew. That desire to connect with the mysterious man in a treasured photograph gave her a deep love for the endless possibilities of a healing and everlasting story. Janet's debut novel, Solomon's Porch, is scheduled for release in July of 2021 through Elk Lake Publishing. She is also a writer/music reviewer for Nashville Arts & Entertainment and Crossroad Magazines, a devotional contributor to Christian Woman, Power for Today, Inspire a Fire, and The Christian Pulse. Janet has featured stories in several anthologies, including The Spirit of Christmas and Sweet Tea for the Soul: Real-Life Stories for Grieving Hearts. She wrote The Parent’s Guide to Uncluttering the Home, released in 2011. A wife of one, mother of three, and Tootsie to four, Janet currently writes from her quiet two-acre corner of the world near Elizabethtown, KY. She has spent the last few years preparing to introduce her novels and children’s stories to the world. Inspiring stories that stretch your heartstrings. An unforgettable combination.

Do Your Best, Tess!